This website describes the provision of working capital and a range of operational support services for which Eolas Capital receives a revenue share as compensation from a Partner Manager including from investment manager partners of its parent company and affiliate, Channel Capital. In this arrangement, such services are not considered to be investment advice and Eolas Capital is not acting as an investment adviser. These services are not intended to be, nor should it be construed or used as an offer to sell, or a solicitation of any offer to buy interests or shares in any investment product or private funds offered by the Partner Managers.

Eolas Capital was founded in 2021 by Channel Capital and Des Mac Intyre, to provide investment managers with the capital, business platform, and distribution resources needed to thrive and expand their business.

Headquartered in Boston and majority employee-owned, we are focused on the growth and development of boutique asset managers in North America and global asset managers seeking to expand in this market.

Channel Capital is a multi-partner asset management business dedicated to building and supporting a unique group of investment managers worldwide. Channel provides a range of services including incubation, operations, distribution, marketing and responsible entity services to eight investment management firms with associated assets of A$18.3 billion as of June, 30, 2022.

Des is Managing Director and CIO of Eolas Capital. He is co-founder, with Channel Capital, a shareholder, and chairs the Investment Management Council. Before forming Eolas, Des had dual responsibility as CEO of Mellon Investments Corporation and of BNY Mellon Asset Management North America, overseeing all the asset management firms in the U.S. including, Mellon Investments Corporation (formed through the merger of Standish Mellon, Mellon Capital and The Boston Company), and CIS before it was split into separate operating divisions, accounting for over $800 billion of assets under management at its peak.

Des also restructured the operations of two other BNY Mellon affiliates: Amherst Holdings in 2019, and EACM in 2020. He also created and spun off a trading services subsidiary – xBK – the same year, that was subsequently transferred to the Asset Servicing division of BNY Mellon. At the time of his departure, Des was also responsible for representing BNY Mellon's minority ownership interest in the Siguler Guff, a multi-strategy private equity boutique.

Prior to BNY Asset Management, Des served as Head of Investment Process Oversight at Bridgewater Associates. Before Bridgewater, he was the Chairman & Chief Executive Officer of Standish for over a decade growing the business from $35billion to over $175 billion during that period.

His investment management experience spans more than three decades and includes roles as Chief Operating Officer at Pareto Partners, where he coordinated the subsequent sale of the business to Mellon Investments Corporation; Head of European Pension Strategies for Deutsche Asset Management; and Head of Risk and Treasurer for GM Asset Management. He also held senior positions at Russell Investments and the London Stock Exchange, earlier in his career.

He is active in the local community and as a philanthropist and has served on multiple boards, including the Alzheimers Association (MA/NH Chapter), RIAN Immigrant Center, Inly School, and has been active with the American Ireland Funds.

Des holds an MPhil in Management Studies from the University of Exeter, where he also served as an Honorary Research Fellow, and a BA from University College Dublin. He also completed an Advanced Management Program at Harvard Business School. 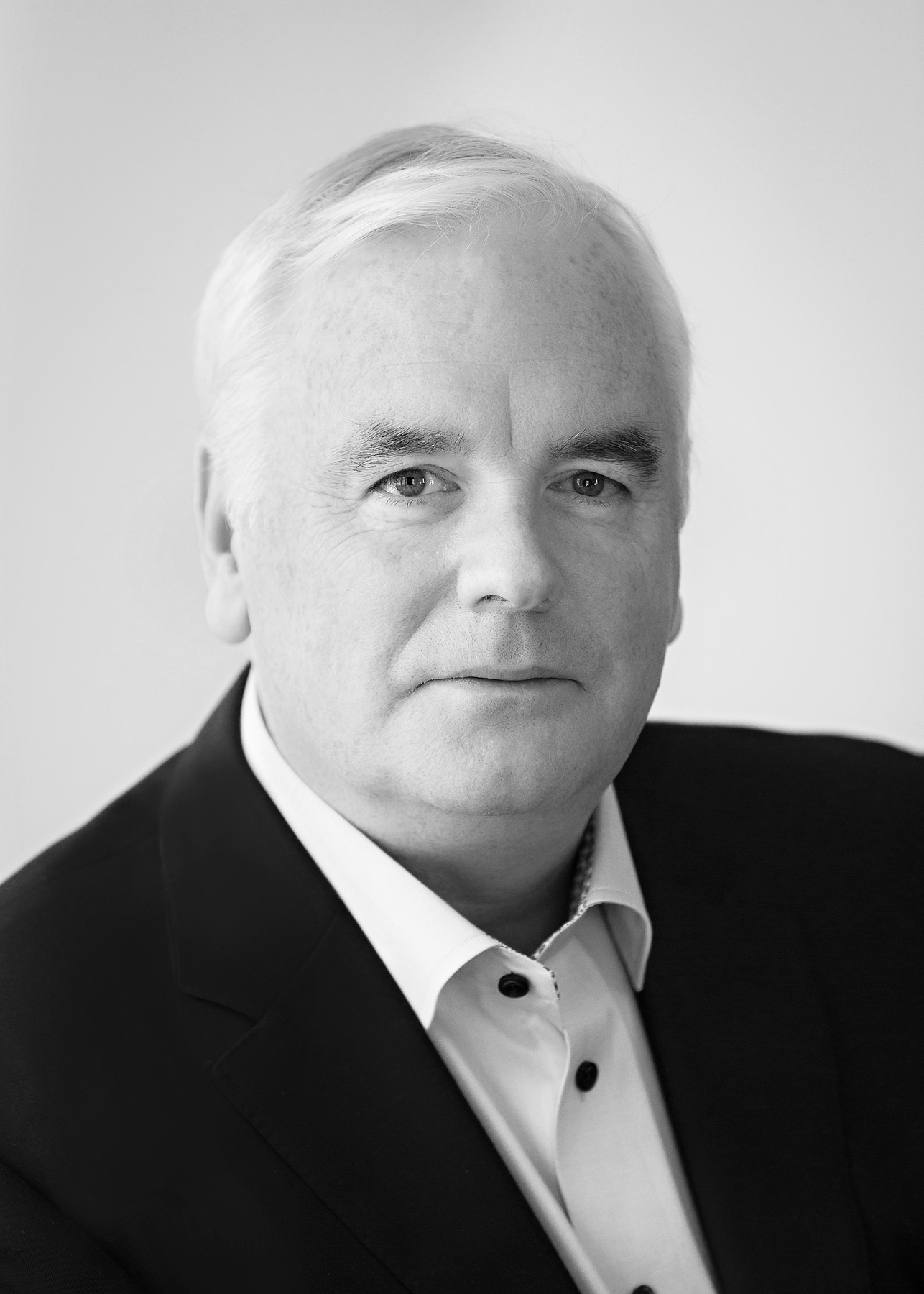 Eolas Board and Governance

Channel Capital is an independent, multinational firm with a strong vision to be the partner of choice for specialist investment managers. Founded in 2013 in Australia, it now has offices in 6 global cities, 47 staff and 8 global partners, Eolas included.

Channel Capital was built on the values of integrity, trust, and client care and has a history of delivering exceptional results for manager partners and building longstanding client relationships.

The journey so far 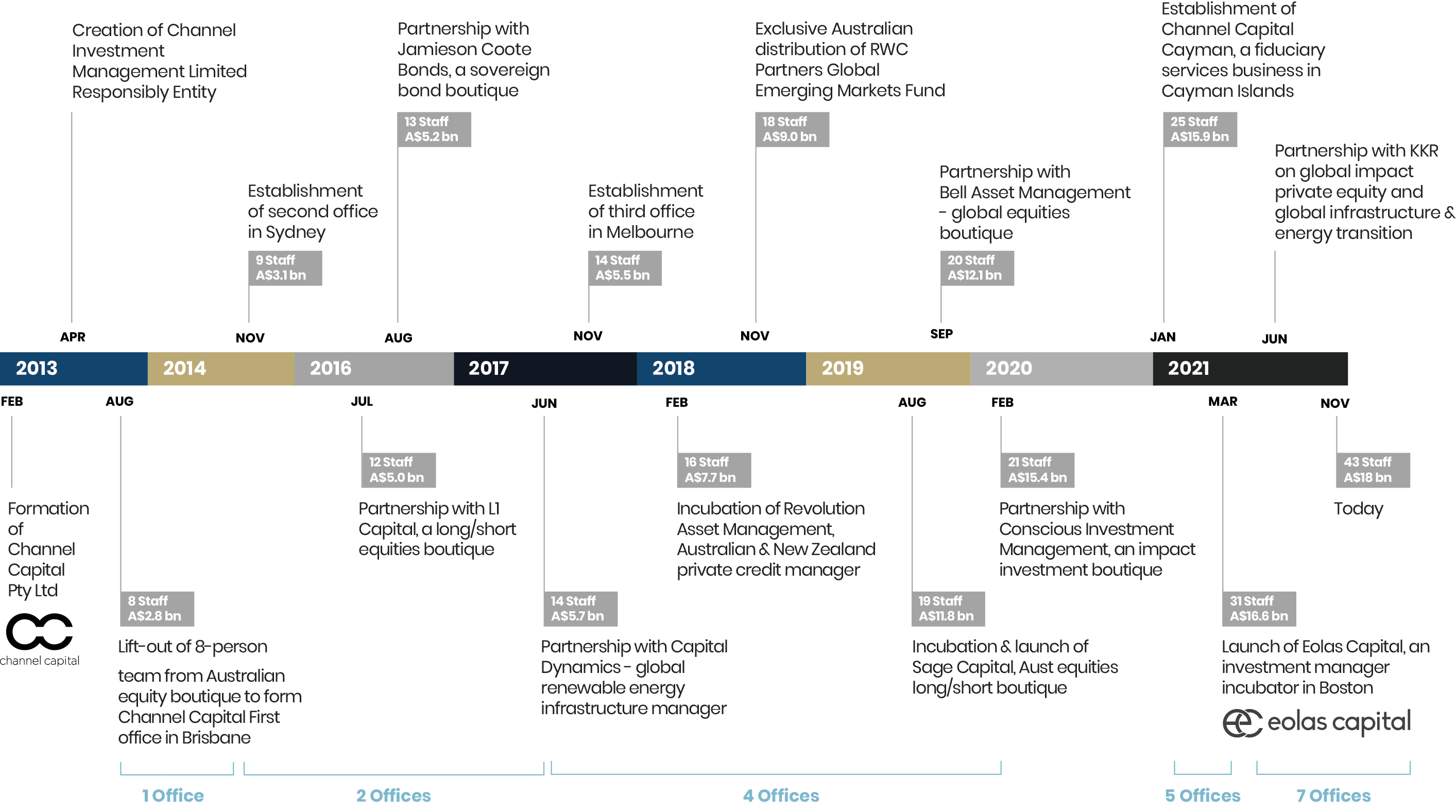